What are the mosques we have already examined? Let us recall the Burj Al Mamlyaka , Sultanahmet , the Al-Haram and the Kaaba , White Mosque , Sheikh Zayed Mosque , Town Mosque - Masjid Bandaraya , the Great Mosque in Djenne . That's provided, how many have accumulated! It is time to introduce a separate tag :-)

And what we see today? 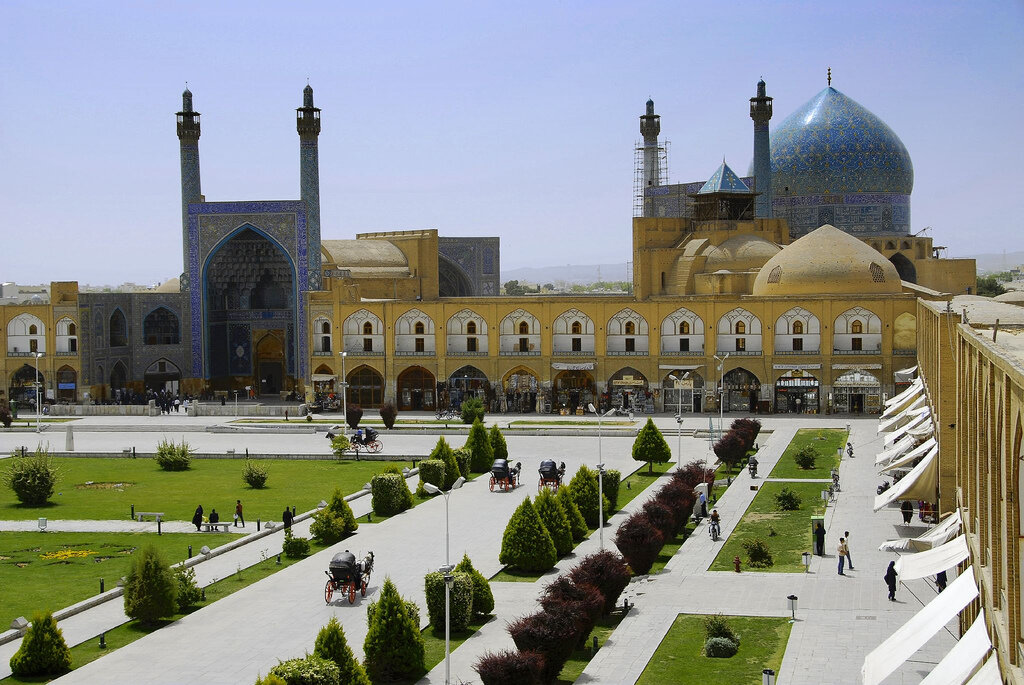 Imam Mosque, formerly known as the Shah mosque, the mosque is the largest of the ancient city of Isfahan, which is located 340 kilometers from Tehran (Iran) on the banks of the river Zayande.

The city of Isfahan is one of the largest cities in Iran, but centuries ago it was the capital of Persia. By the end of the 16th century Isfahan was at the height of his greatness. At this time active were built, and then built some of the objects in the latter were true historical monuments. In those days the city was known as e-Nesf Jehan, meaning "half of the world."


The city has many monuments of Islamic architecture XI-XIX centuries. Especially famous Imam Square. It was built in 1612 and is the second largest area in the world. Area Imam square, surrounded on all sides by a two-story arches. Four of the area are an example of architecture of XVII century, embodying the features of the political, economic and religious life in Iran during the reign of the Safavids. In the southern part of the square is the magnificent Shah's Mosque (today it is called - Imam Mosque). 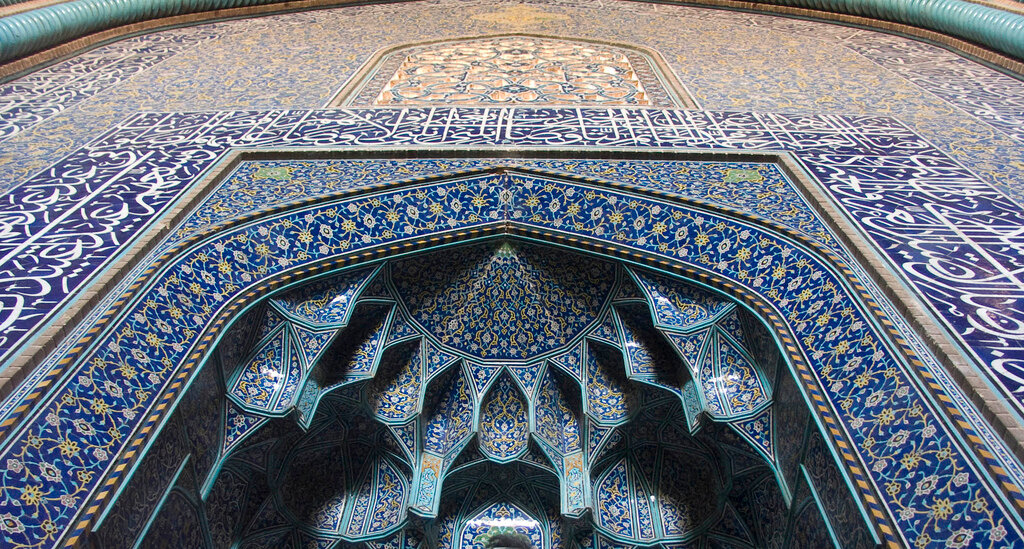 Certainly one of the main buildings in the city was and is the above-mentioned mosque. The grand building is located in the heart of the city on an area of ​​the Imam.

The enormity of structures found in the full inside: the vastness of space, nothing to do with concentration and simplicity inherent in the Islamic worldview. The path starts at the main door, adorned with a portico with a semi-dome, lavishly trimmed with typical "stalactites," ornamented with enamel inlay (mukarna). The door is decorated with plates of embossed silver-gilt, leads into the lobby of round shape, which is almost the axis orientation of the building.

He enters into a vast central courtyard surrounded by four iwans - typical of atriums with immense columns that lead into the vaulted halls of worship. Striking opulence aivan decor, located on the axis of the north-east. Due to the lack of orientation with respect to design the portal, he seems a simple continuation of the lobby. Ivan, oriented to the west, is characterized by goldatesh-chair, from which the imam calls to prayer. Large portico aivan deployed to the east, the bottom is decorated with marble slabs and sides - ceramic enamel blue tones. This is followed by the interior, where the walls are decorated with majolica, and a semicircular arch decorated with enamel "stalactites." The last room is crowned with a dome. 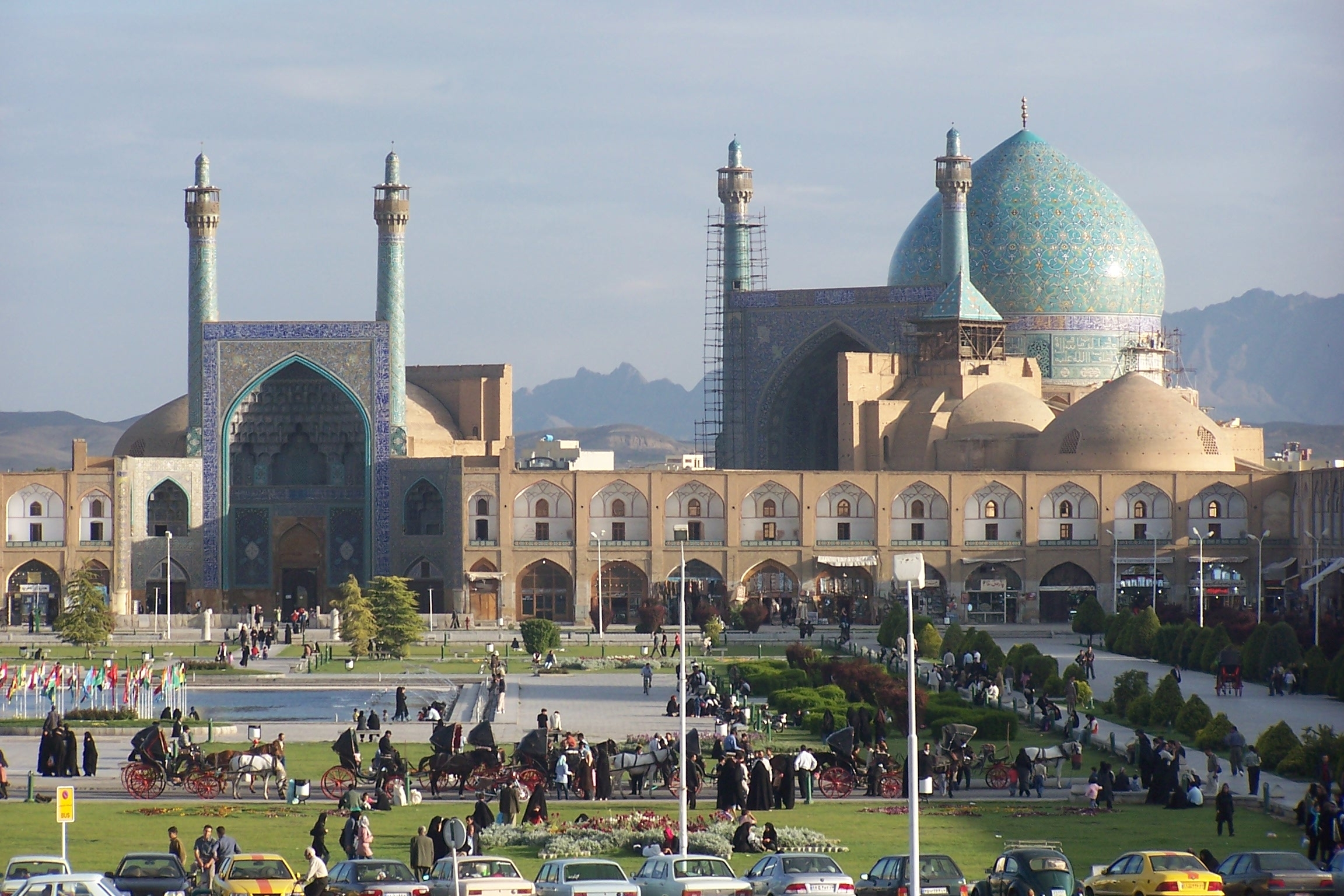 The mosque was built in the southern part of the area. However, do not have to look for it, even if you were the first time in Isfahan. The fact that the Imam Mosque is the tallest structure in town, and its dome is visible even from afar. The height of the minarets of the mosque is 42 meters, and the main dome rises above the area to a height of 52 meters. The total area occupied by a mosque, is about 20 000 m ².

Of great interest to tourists is a truly unique acoustics inside the church - the fact that, thanks to a marvelous construction of the walls you can hear the whisper of a human, even from the opposite corner.

Until now, this mosque is the finest example of Persian architecture. 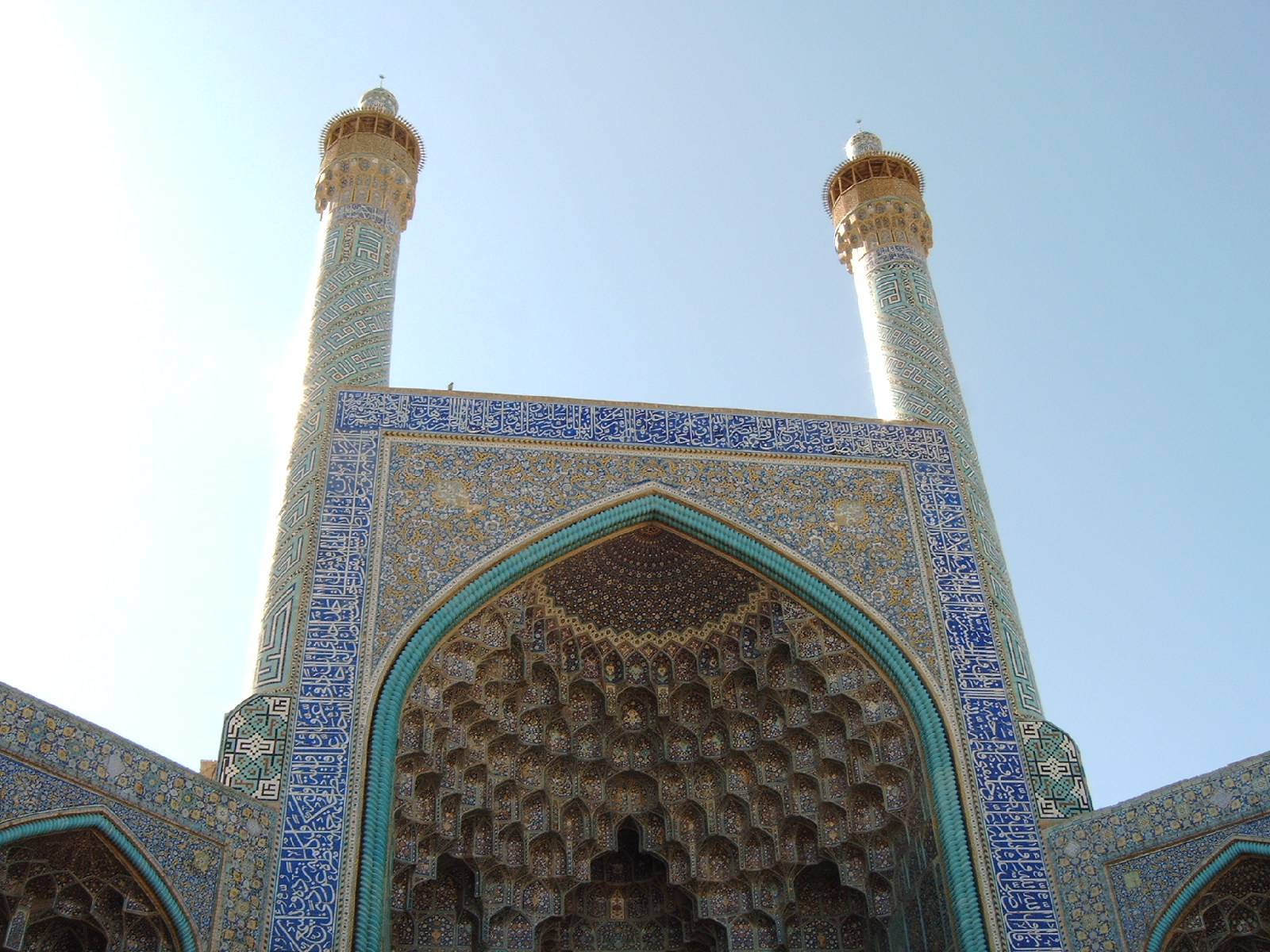 Construction of the mosque began immediately after the completion of the urban area, ie in the 1612th year. The work was done for nearly three decades, and the mosque was completed only in 1638. Without a doubt, the main part of the mosque of Imam is its huge dome of the sky-blue color. He was seen from almost every corner of the city! 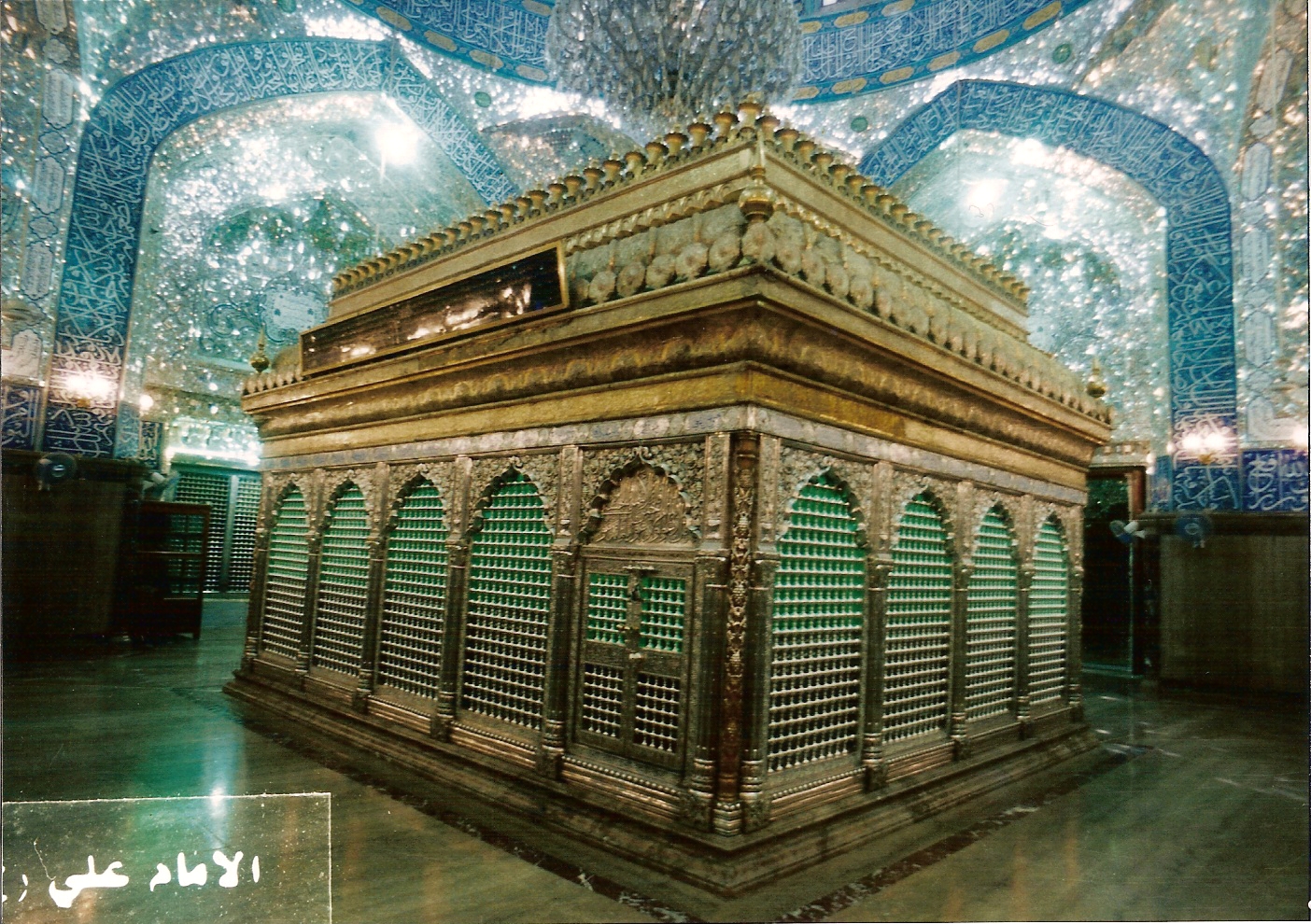 No less impressive dome and two minarets and located between the arch height of 27 meters. All of these structures, as well as the dome of the mosque, lined with patterned tiles of blue and dark blue. Archway leads directly into the mosque itself.

Passing along a narrow winding corridor, travelers get to the courtyard in the center of which is a pool for bathing. The walls of the mosque are decorated with many old paintings, exquisite mosaics and intricate ornaments. 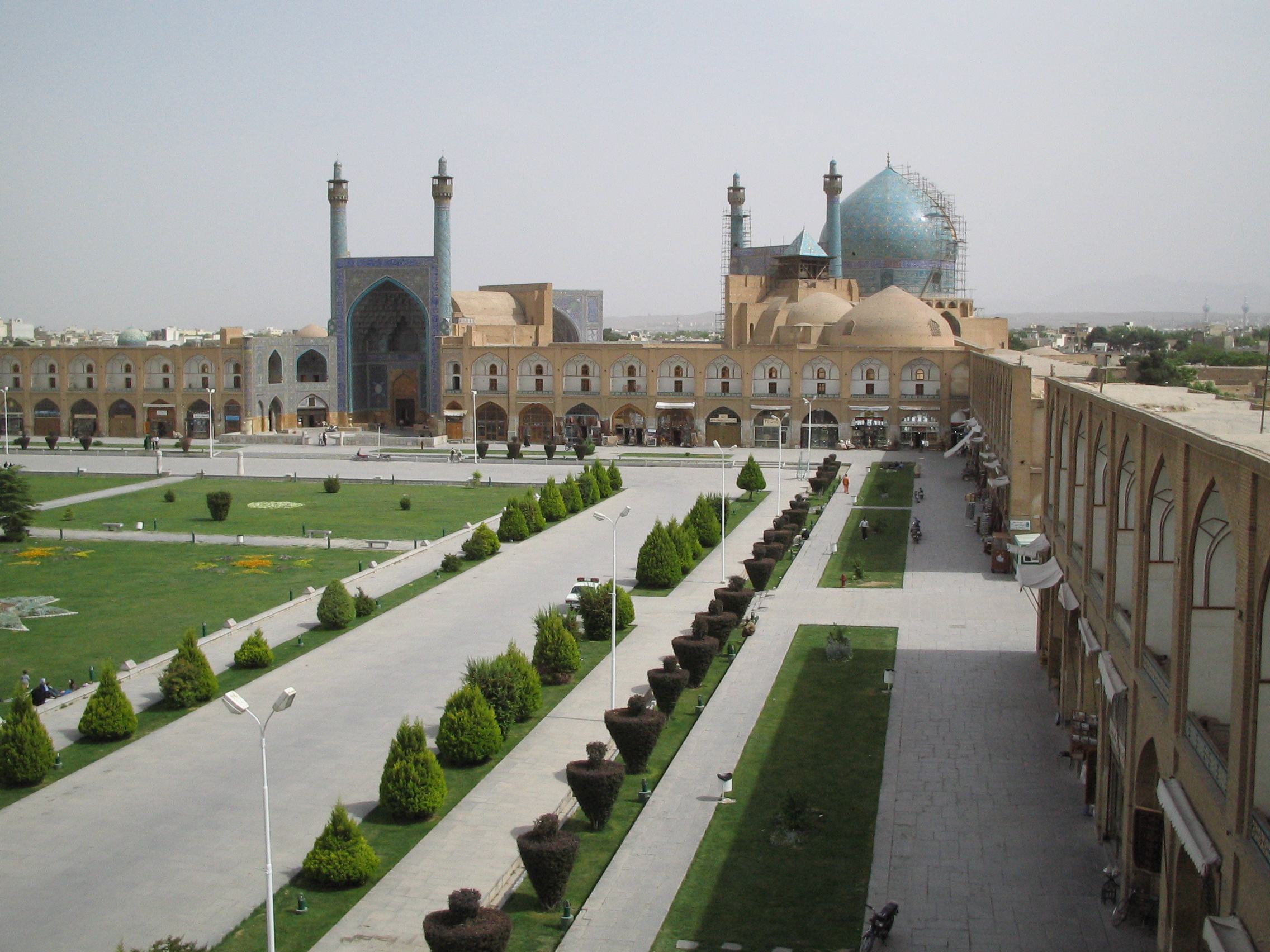 Most of the rooms of the mosque is quite vast and richly decorated, which is unusual for the Islamic world. Typically, the construction of the mosque are striving to create a simple and functional structures at the same time, however, Imam Mosque is the exception rather the rule.

It should be noted, one of the unique features of the mosque, but it the acoustics. Inside the building clearly audible any sound, even if it is a group of tourists whispering at the far end of the hallway! Many travelers come here specifically not to admire the unusual architecture of the mosque, and actually experience the acoustics inside her room! 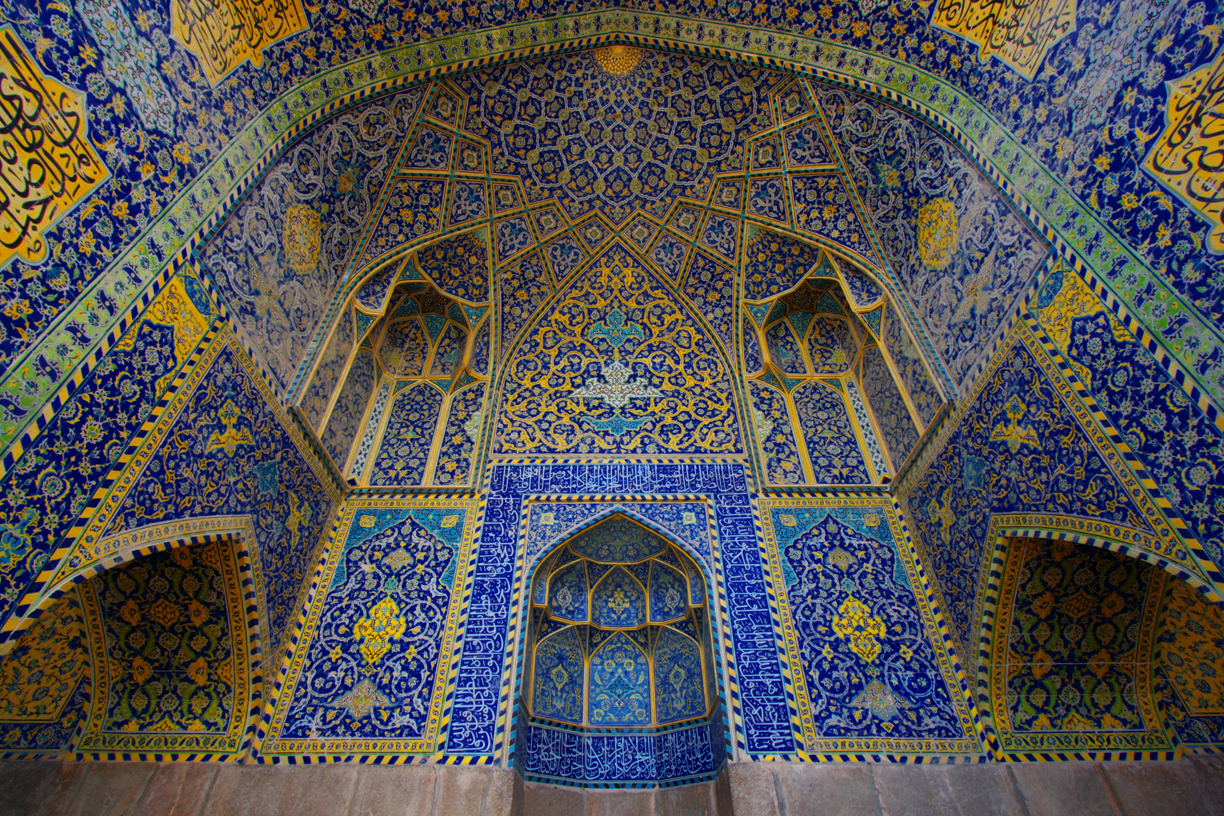 Shah Abbas I was the ruler of the Safavid dynasty. In the era of the ruler of this city of Isfahan became the capital of the Persian Empire. With his hands in the center of the city was first built one of the most beautiful squares - Nahshe Jahan, and then the Imam Mosque. This temple is surrounded by four aivan, which are interconnected by a number of arcades. The main iwan, which is directed toward the Muslim holy Kaaba, is truly the largest and most impressive. It overlooks the main blue dome. To build this mosque took about 18 million bricks, but to decorate it took half a million mosaic tiles. By the way, specifically to complete the temple as soon as possible, Shah Abbas ordered to use while one of the new methods of irrigation decor, which was called "Haft-rank", ie, the literal translation of "seven colors". As the foundation of the mosque, it is composed of the most famous in the XVII century white marble Ardestanskogo. All the internal walls of the temple are decorated very unique designs - here there is a mosaic, ornament and ligature. Imam Mosque is just great - its total area is 20,000 square meters. The height of the minarets is equal to 42 meters and the height of the main dome - 52 feet. Thus, this temple is the tallest building in the city. 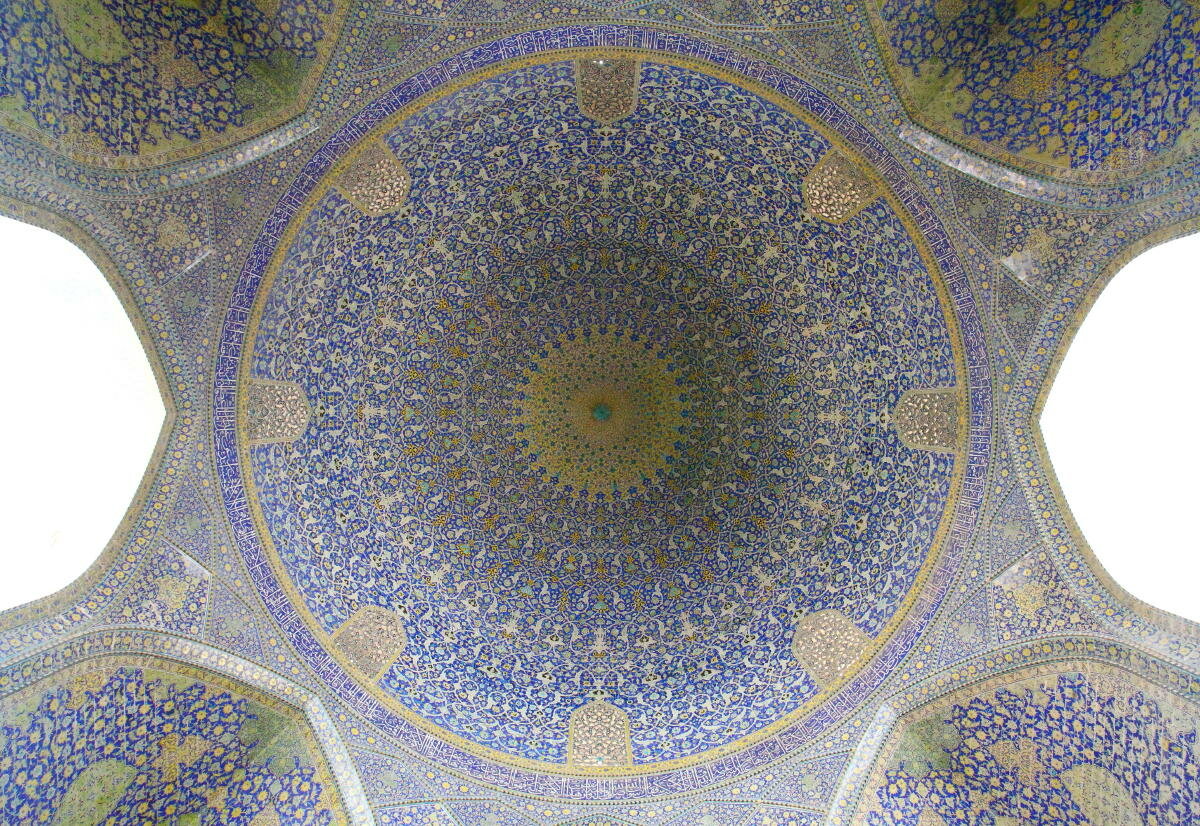 The entrance to the mosque is truly a magnificent portico with a huge 27-meter high gates and two turquoise minarets, which dominate the stalaktitnymi niches. What follows is a short curving hallway that leads into the courtyard. In the middle of the courtyard is a large swimming pool for ablutions. Also inside the mosque is a marble mihrab - a niche in the wall that shows the direction of Mecca, and another - Department of Minbar, the work is done quite tastefully. 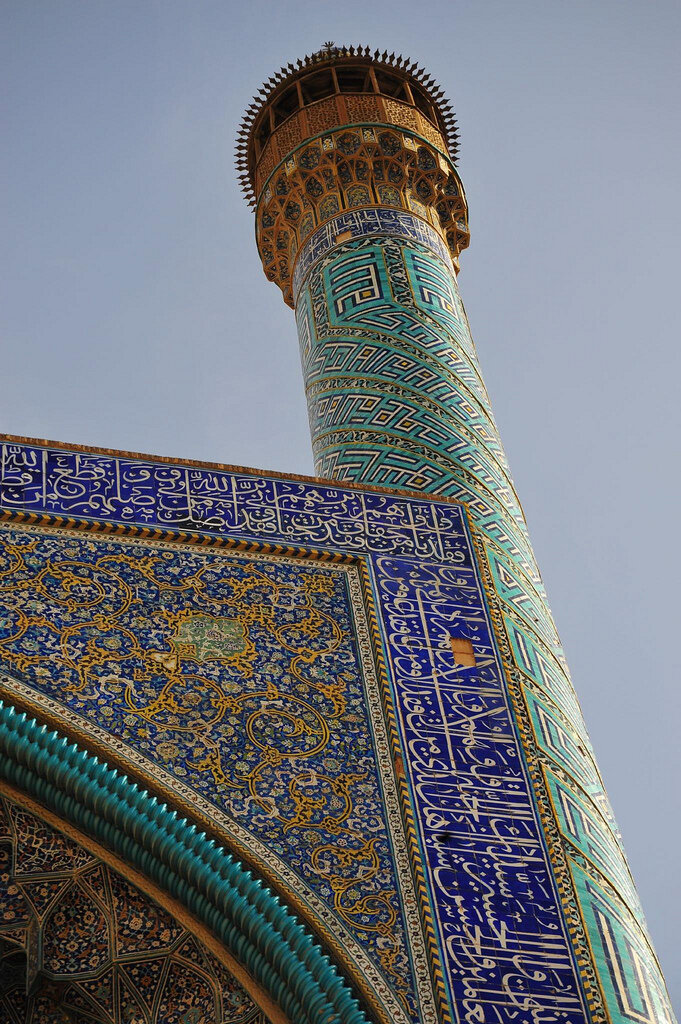 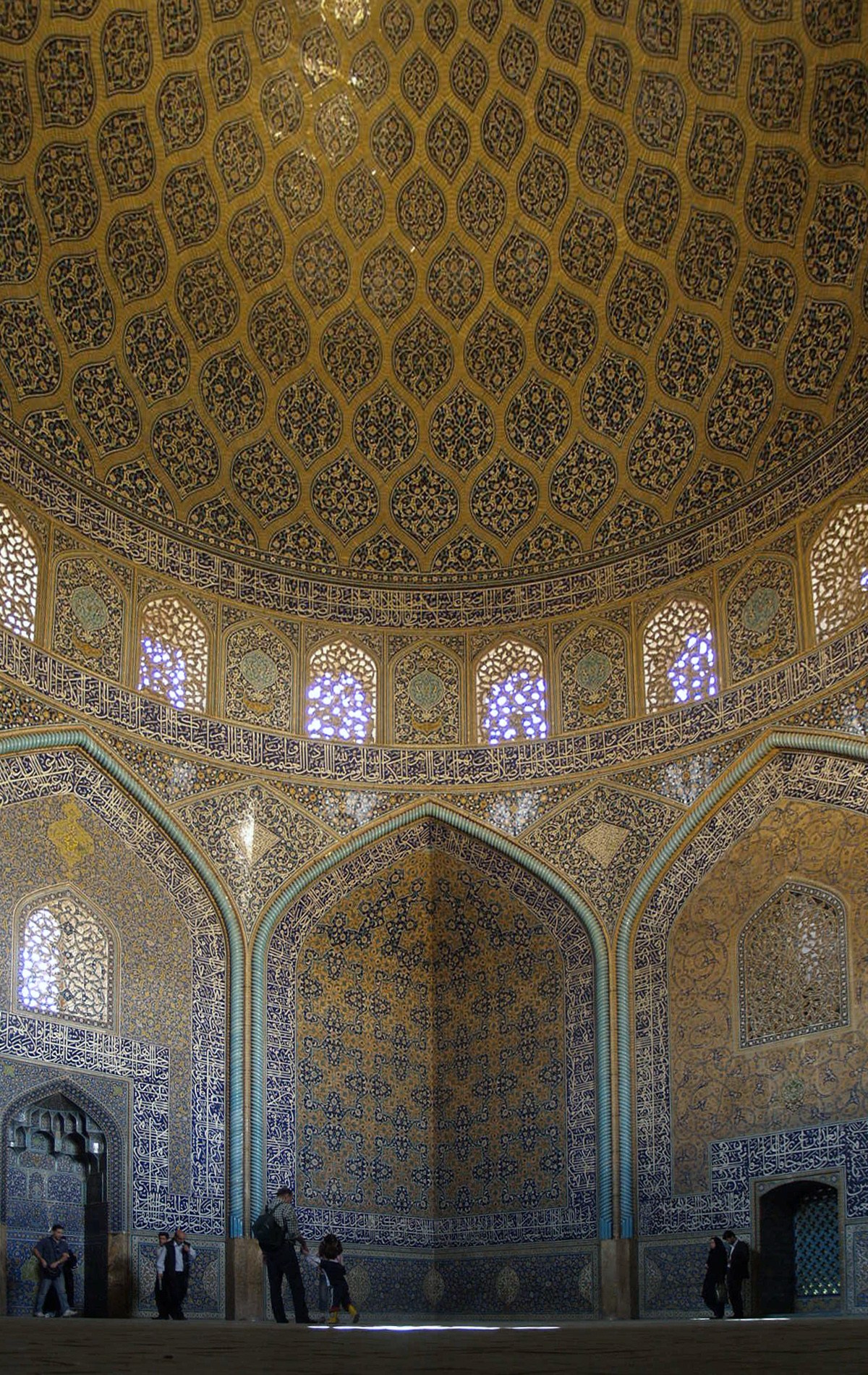 Today, the mosque of Imam attended not only by numerous believers and pilgrims, and tourists. Every year in the ancient city of Isfahan welcomes thousands to enjoy the stunning architecture of the mosque. Marvel of modern construction and architects, who with one voice declare that this object is one of the best examples of Persian culture! 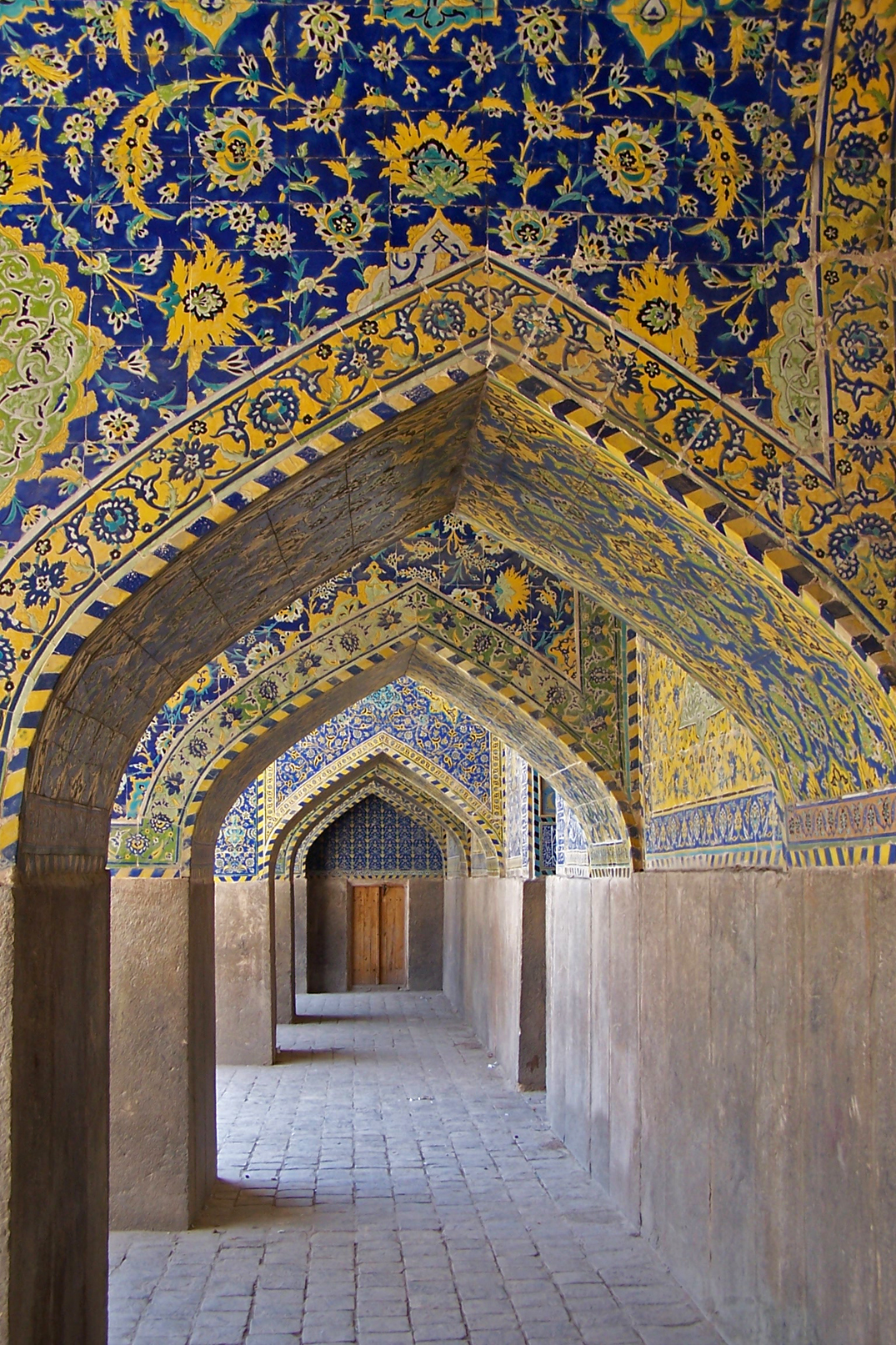 Here you can visit a virtual tour of the mosque.
Awatif at 02:18
Share